I can’t think of Christmas without thinking of Christmas songs. They are synonymous with the season. I am taking a look back at some songs that generate particular memories for me at this time of year. 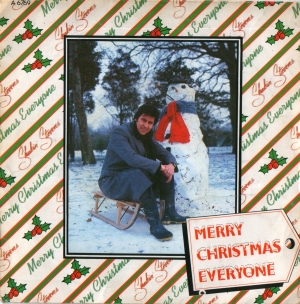 The Christmas number one in 1985 and my first ever single. I’ve gone right back to our days living in town in a little house in Clonard. The real tree in the corner of the sitting room. Artificial trees were few and far between in those days and either way, my Mam would not have entertained anything other than a real tree. I can’t honestly remember what I got that Christmas aside from the square flat package under the tree that was my Shakin’ Stevens single……on vinyl no less! My Mam, grinning ear to ear as I ripped the paper from it to be greeted by himself and his snowman. She then promptly placing it on the record player so good ‘ole Shaky filled the room!

This was the Christmas record of my childhood! I suspect my Mam had a bit of thing for David Cassidy! Every December this was produced and played over and over again. As a child my favourite song from it was Santa Claus is Comin’ to Town. I cannot remember a Christmas when this record wasn’t played. In fact it probably spent every season sitting on the turntable before being tucked safely back into the sleeve for another year.

A Child is Born – Johnny Mathis

I *think* this was my Mam’s favourite Christmas song. I certainly cannot listen to it without thinking of her. Anytime I hear it I cannot help but feel a little emotional as it transports me right back to Christmas with my Mam. She liked all the hymns, Silent Night, Away in a Manger etc, but this one was one she really loved. It was one she sang in the choir at Midnight Mass every Christmas, which she loved too. I think Midnight Mass was a highlight of Christmas for her, I was less keen I have to admit!!

This song doesn’t represent one particular memory for me but it does cry Christmas. Quite an unusual Christmas song really, with language that should have been deemed offensive in 1987, however, an edited version received criticism and complaints. I just love it, it’s so far removed from ‘traditional’ Christmas songs; the singers aren’t perfect, the music is raw and for me it just signals Christmas. No Christmas night out (though I have forgotten what that is!!) has ever been complete until Shane McGowan’s gravelly voice has filled the room and the words scumbag and maggot are roared with glee.

I would absolutely love to hear what Christmas songs evoke particular memories for you. If you don’t write a blog and wish to share your ‘Music and Memories’ you are welcome to email me at nicnaessens@gmail.com; otherwise just hit the link below and add your post.

3 thoughts on “Music & Memories at Christmas”

This site uses Akismet to reduce spam. Learn how your comment data is processed.

Welcome to Simply Homemade. I am Nicola, a mum of five from Co. Wexford. This is, my little corner of the internet where I am sharing a wealth of perfect imperfection.

Simply Homemade, by name alone, is a real representation of my family and I,  and the life we live. Our home is the the heart of it all.